Hello! I’m Sarry from Japan.
Do you get news?
There are lots of news-providing media, like TV, newspapers, and the Internet, and these days a lot of people even get news by browsing social media.
To get new information rapidly I watch YouTube news and look at Twitter.
Nowadays there’s a huge amount of information flying around the world, but can you tell whether it’s real or fake? . 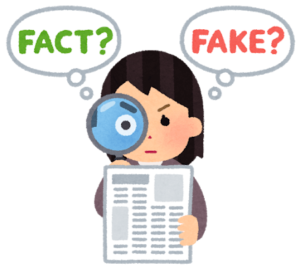 The times have changed, and nowadays anybody can release information, so people need to improve their “news literacy.”

What is ” News literacy ” stand for ? 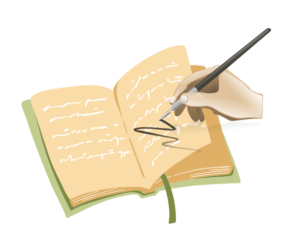 “Literacy” is the ability to read and write, but what is news literacy?

It refers to the abilities to make judgments and think critically about news and to identify correct information.

If you see a surprising piece of news on Twitter, you may want to forward it, but just a moment: is the item correct or fake?

It’s hard to judge such things in this day and age. People are swayed by huge amounts of information, and a lot of it is psychologically damaging. You need to take measures to make sure the news you get is accurate. 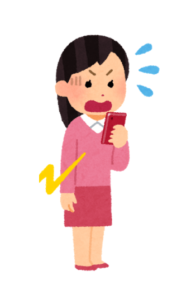 “Infodemic” is harmful to the world. 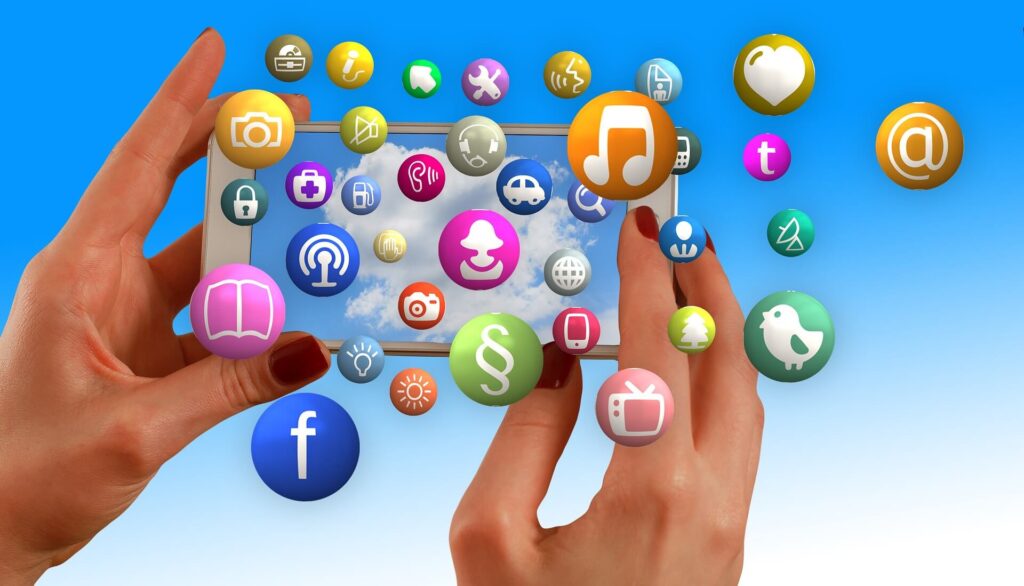 What is “Infodemic” stand for ?

A long time ago people only got information from major media like TV, newspapers, and radio. However, the Internet lets people get news from social media, and anybody can release it.

This has created an “infodemic” that is now a big issue.

A lot of false information is being spread, and this is harmful to the world.

Infodemic is a blend of “information” and “epidemic” that typically refers to a rapid and far-reaching spread of both accurate and inaccurate information about something, such as a disease. As facts, rumors, and fears mix and disperse, it becomes difficult to learn essential information about an issue. Infodemic was coined in 2003, and has seen renewed usage in the time of COVID-19.

This has become especially evident during the coronavirus pandemic.

Let me give an example.

You may recall that in the early months of the pandemic toilet paper was sold out at all drugstores. My local drugstore didn’t have any either, and that was surprising to me. It was the result of an “infodemic.” 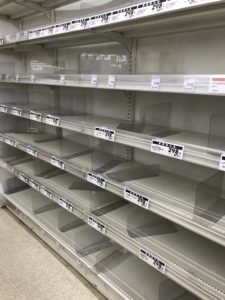 The book says that due to fake news released on Twitter, people came to believe that there was a shortage of toilet paper.

At first I thought this was only happening in Japan, but all countries were in this situation.

In Japan the following fake news items were released:

That all sounds plausible, but it wasn’t true.

The book points out that even if you don’t believe this kind of fake news, other people might, and they may start panic buying.

This makes you think that there may really be a shortage of the item, and you feel you have to do the same thing as everyone else. 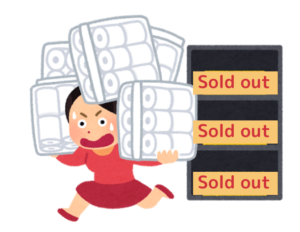 How can you fact check ?

Well, is it possible to determine whether information is correct?

People have to make sure they can trust the information they get. How can they fact check it?

The answer is by improving their news literacy. 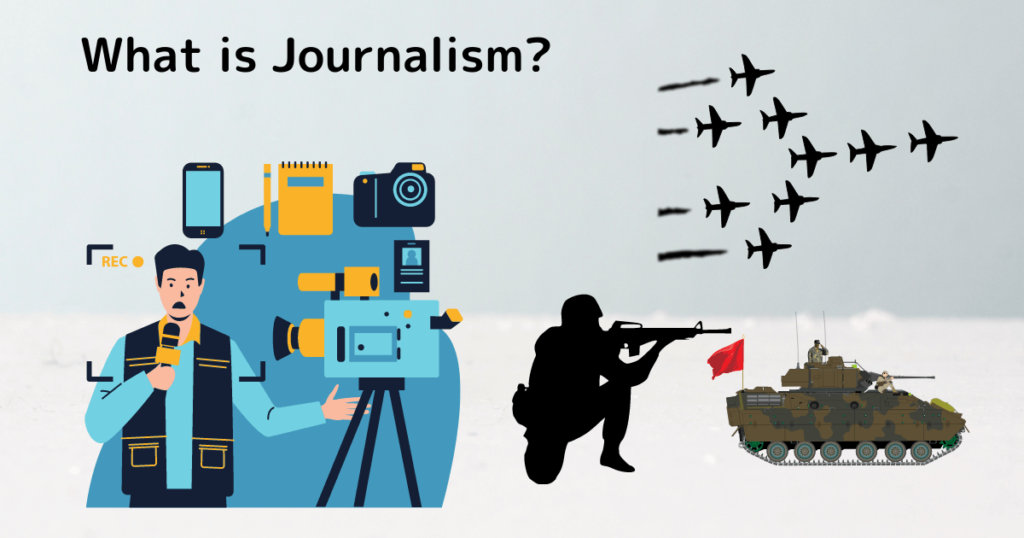 First, think about journalism. A person who collects information and reports it is called a journalist. News is transmitted to people through media, and this system is called journalism. Journalism is an activity aimed at protecting the freedom of people and providing useful information to citizens that’s based on facts.

However, some forms of media don’t meet these definitions.

The book gives some examples, including Chinese media companies like People’s Daily and Chinese CCTV, which is censored by the Chinese Communist Party. 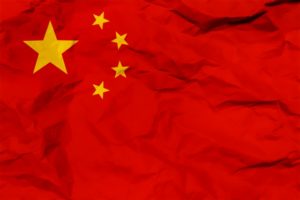 Journalism must preserve “freedom of speech” and “freedom of reporting,” and censored media isn’t journalism.

Some journalists have been killed or captured for their reporting, so their work puts their lives at risk. Thanks to the reporting of such individuals people can get various news, including information from overseas that they ordinarily wouldn’t get. I sincerely appreciate journalists. 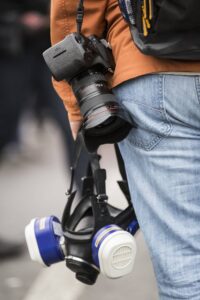 The way to make sure if the information is correct 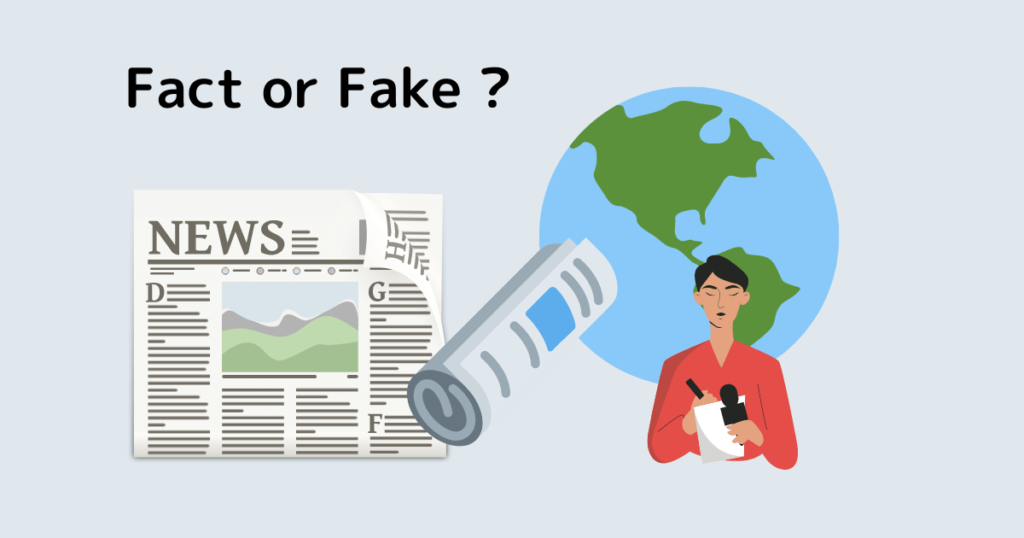 Finally, the book says that to judge the accuracy of information you need to identify its source.

Information can be ranked into three levels or more of trustworthiness: 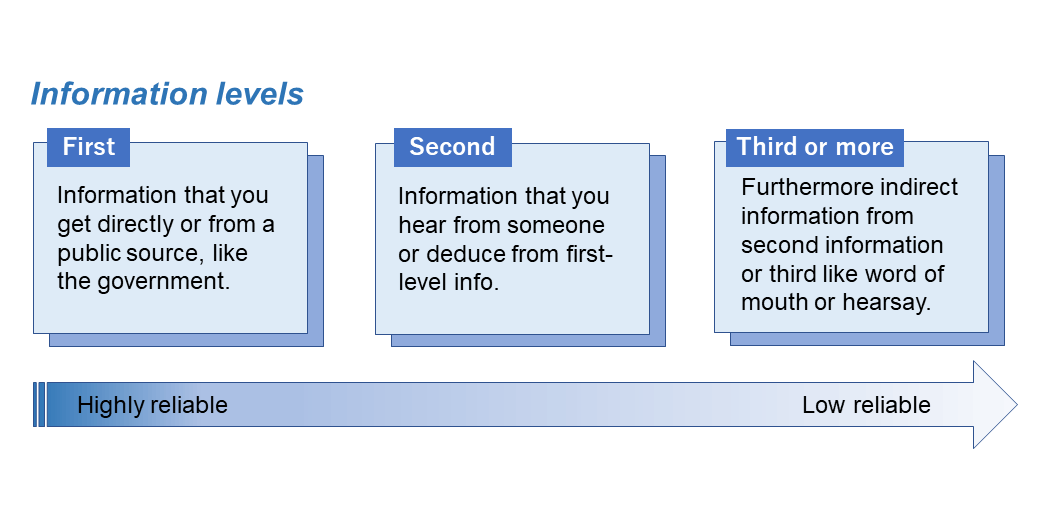 There’s news produced in other countries that has been translated into your own language, and that’s an example of the second level of information.

As you move to the second and third levels, the credibility of the information goes down. To get close to the facts, first-level information is better.

Last year the US had a presidential election, and Japanese media too focused on the event.

A huge amount of election news was released on TV, in newspapers, on the Internet, and on social media. 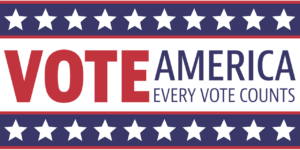 At that time I didn’t know anything about news literacy, so I believed some fake news and conspiracy theories, and so did a lot of other people.

To make sure you get the facts, let’s improve your news literacy.

It’s a good ability to have.